Jodi Sutton What happens when a mistake is made? 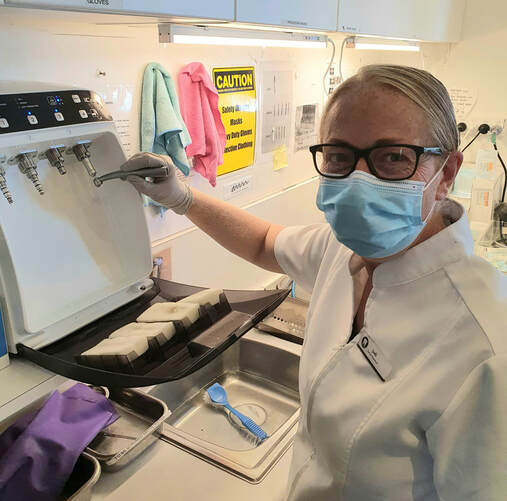 I again talk with Jodi and this is how it went.

Alan: I'm sure there were times when I made a mistake that you let me know without making the patient aware.

Jodi: We were doing a check-up on a boy that we used to see every three months because he had high rate of decay and you were doing your check-up and when you got around to the buccal of the 26 27 28. You checked all that but I noticed this little white dot high above his tooth and you skimmed over it and I thought then at that point that it was an abscess and so what I did with spark a conversation about whether the patient had actually hurt himself with his toothbrush. Do you remember knocking yourself in your toothbrush? And then you came back and have another look at it and you looked at me and said I think we need a PA. So that was me telling you I’d spotted an abscess that you hadn't seen but I made it sound like the patient had an ulcer as opposed to the patient having an abscess.

Alan: Did I come to you and say thanks for doing that?

Jodi: You did. You said good spotting. I didn’t see that at all.

Alan:  Occasionally in a dental practice not everybody does the right thing at the right time.
Jodi: Correct.
Alan: Occasionally you are working with a dentist and they make a mistake.
Jodi: Uhm.
Alan: It never happens.
Jodi: I wouldn’t say it never happens. They might get a bit distracted when they are talking with their patient. The patient may be in for a checkup and clean and they done the clean bit and the patient gives them a million questions and they sit the patient up and they haven’t had their teeth polished. Sometimes that happens but I haven’t seen any dentist make a mistake that has made me go oh my goodness.
Alan: Assume the dentist forgot to do something minor how would you tell them?
Jodi: I would stand behind the patient and wave at them with what they have missed. Wave the pumice about. And they will say.  We’ll just put the chair back. Couple more things to do. Or sometimes I will even say that to the patient. We can’t let you go because we have to finish off with a polish.
Alan: I vividly remember assisting one dentist and he drilled into the floor of the patient’s mouth. A big mistake. Next day the patient came to me to complain. I had to say; something honest; that helped the patient; that helped the dentist; that avoided lawyers who don’t solve problems.  It was difficult.
Alan: Assuming the DA makes a mistake, which obviously hardly ever happens, how do you think the dentist should make it a learning experience.
Jodi: Well I feel that is a discussion behind closed doors.  Never in front of the patient. A gentle discussion is the way to go. Hitting someone with a sledgehammer doesn’t work. My preference is that the patient not hear because I think the patient has to have confidence in both of the people in the room.
Alan: I would agree.

Jodi: I'm happy to be told when I've made a mistake when I've done something wrong. I'm certainly not happy to be chastised in front of a patient.

Alan: Do you want to be told you’ve done the right thing. You’ve done it correctly.

Alan: In front of the patient.

Jodi: Of course. We like the patient to think we’re stars as well.

Alan: Well you have three people in a room and you are doing something which is a little bit stressful and anything can happen.
Jodi: This is absolutely correct.
Alan: In the dental surgery all the people have to contribute. Nobody can do anything by themselves. Everybody needs everybody else. Everybody should be both giving and receiving something.

Alan: Occasionally in dentistry the DO or DA need to talk about a practical procedure with a live model. It is just a case of telling the patient the truth. Most people are reasonable, understanding and can see things from another point of view.