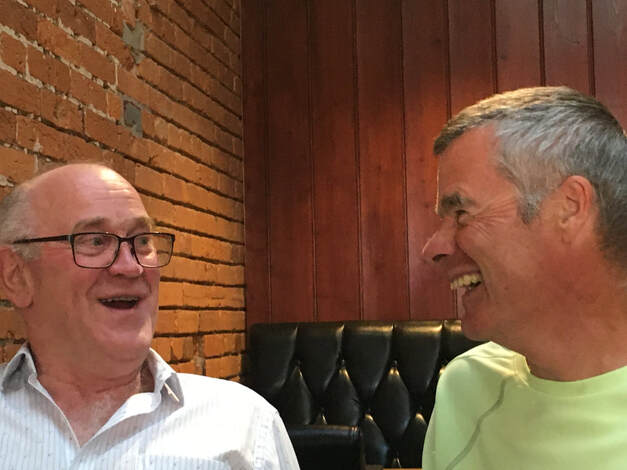 ​Garry Owen graduated with me in 1979. In 1987 he returned to his home town.
Garry wrote the following for a reunion magazine:
I enjoy the practice of dentistry in a regional town.
I like most of my patients particularly those with whom I have established friendship over the course of a number of years. I enjoy hearing the story of their life journeys. I am part of their community and lives not because I have to be but because they want me to be.
Alan: Please can I talk about what you wrote.
Garry: I inherited a lot of patients when I came back to Ballarat. And the patients and their cards go back to the fifties and sixties. So, it’s like the family axe. The head has been replaced twice the handle three times but it’s still the same family axe. So, the dentist has changed, the premises have changed but the cards maintain the practice.
Garry: The patients were young people years ago. Now one of the saddest things is I look through the hatches, matches and dispatches and see people who will never come back to the practice any more.
Garry: Recently I saw a couple of brothers I’ve known. Completely different personalities. Saw one in November or so and a look in the paper a week or so later and saw a death notice for him and then his brother comes in for a broken tooth a week or so later and the conversation was really difficult. We just had a yarn for about half an hour.
Alan: You are back in the community you were born and bred in.
Garry: On my first day back in Ballarat on my return in 1987, my first patient was sitting there and I turned towards him he turns towards me and he goes bloody hell. Baloo. He was a cub leader in the boy scouts with me when I was eight, and he’s known me since then and he didn’t realise he was seeing me that day.
Alan: That would mean you giving him more appropriate treatment.
Garry: It took me twenty years but I got there eventually.
Garry: I saw him down the street the other day. He’s known me as a kid, known me as a dentist, best part of sixty years.
Alan: And now you see his kids?
Garry: No, no I haven’t seen his kids.
Garry: You realise you want to develop good rapport and ongoing relationships with patients and I don’t see too many young kids because the mothers take them to someone who’s going to be with them in the future.
Alan: Does that mean you need to employ a young assistant?
Garry: Yes, which is what I’ve done in the past.
Alan: Can I talk about. When I graduated my first job I went on the dark side. At the end of every day the dentist I was working for wanted to know my gross. And my aim for the day was to gross a lot. And that turned out to be an absolute disaster. I grossed less and less and was unhappy.
Garry: I’ve employed new dentists and haven’t put them on commission.
Garry: My job as an employee is to train that person and assist them. And I will watch them and not have a holiday in the first six months. Because they need me there. If caught with a difficult extraction or something…
Garry: I can put an elevator and flick that out when they have been struggling for half an hour. And they gotta make those mistakes. If you don’t provide that safety net you are doing them a disservice.
Garry: I worked in a practice where it was the dollar. I didn’t enjoy it.
Alan: Well my experience is the way to make money is not to think about money. To try and do the best thing for the patient, to see things from their point of view, and if they need something expensive, they will beg you for it.
Alan: The other thing I’ve found over the years is that money is not really a big issue.
They are happy to pay for it providing it is done well and the right thing to do.
Alan: I worked in a practice where the dentist did a lot of work for free for his preferred patients.  That created problems. You have to charge the other patients more for a start. And the ones who get the work for free are suspicious. And it gives the impression that money is bad.
Garry: I was always been up front about fees. I’ll give you an estimate. These are the options. I don’t walk in your shoes. This is my preferred options but it’s your call.