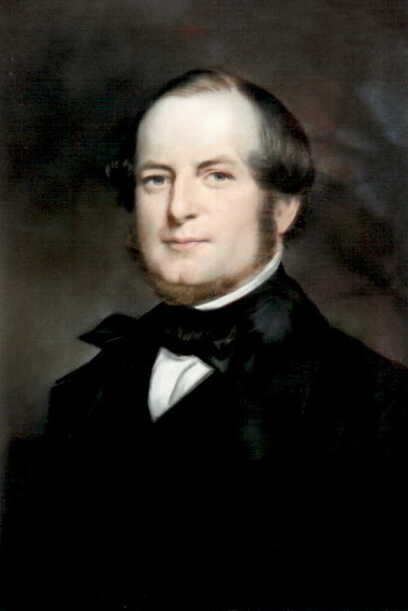 1818: Thomas Bromfield born in Liverpool, England.
He pleaded guilty to feloniously forging. Two 5-pound receipts to defraud the Post Office. There were 4 other indictments against him.

1845: Thomas Bromfield transported to VDL. On arrival he was granted a conditional pardon.

1848: Thomas Hodgson Bromfield pleaded guilty to a charge of illegally pawning forty-three books, the property of the Queen. sentence expired 1852.

1863: Thomas Bromfield bought land near the top of Murray Street.

Bromfield built his new school and called it the Tasmanian Academy. He was the headmaster/ teacher.
For many years after this his school enjoyed a sound reputation.
Gatesheath is an excellent example of a house showing the transition from Georgian to Victorian, with a simple design and ten-pane windows.
There is a large room on the right side of a hall way which was the original classroom.
Thomas was a prominent Mason. A member of the orders of Odd Fellows and somewhat political around Hobart Town.

1848-1989: House owned by Bromfield/Alcock family. When Bromfield’s grandson owned Gatesheath,  it was known as The Dairy because he worked as a milk vendor and customers would often pick up their milk from the house.