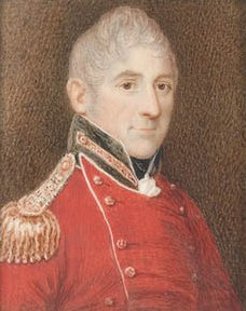 1762: Born on an island off the coast of Scotland. A member of a Scottish highland clan which owned the island of Ulva. His father died at the age of 103.

He was destined to be a leader in his clan. He left Scotland and his family and volunteered for the British army. He was sent to Halifax, Nova Scotia to fight in the American War of Independence.

1807: Married his cousin Elizabeth Campbell. Campbelltown is named after her family name.

1809: Governor of NSW and its dependencies. He was the first Governor from the army. All previous Governors from the navy.

His first job was to restore order following the rum rebellion of 1808.

1811: He visited Hobart Town. He ordered a grid of streets in central Hobart Town. He did the same in Sydney. In Hobart Town he named the main streets:  Macquarie, Elizabeth, Argyle, Liverpool, Murray, Harrington, and Collins.

1815: End of Napoleon Wars. Sea travel was safe and delisted soldiers meant an increase in crime and unemployment in Britain. There was an increase in both convicts and settlers to NSW.

Macquarie treated emancipists well. In return he expected them to attend regular church. They outnumbered free settlers until the gold rushes.  He saw the free settlers as discontented, ungrateful and slothful. He saw the emancipated convicts as being much more grateful and harder working.

1820: Ordered all traffic on roads to keep to the left. This law predates England. In England a law was passed saying traffic to be on the left side of the road in 1835.

He adopted and used the name Australia for the whole continent.

His policy towards aboriginals was complicated. Macquarie returned some land to aboriginal control. He forced some assimilation and launched punitive military expeditions against other aborigines.

A report into his administration said no Governor should be an autocrat. This led to the NSW Legislative Council beginning. It was to advise the Governor.  Him being an autocrat led to Van Diemens Land taking a step towards democracy.

1824: Dies in London. Buried in Scotland on the isle of Mull.